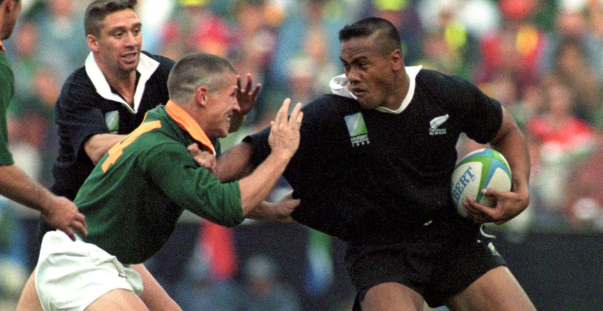 On Thursday 10 July 2019 South Africa and the rest of the rugby and sporting world was shocked and saddened to hear of the death of rugby legend and “bad boy” James Small, one of South Africa’s Springbok rugby team which famously won the World Rugby Championship in 1995. He died of a heart attack at the relatively young age of 50 years. He is the third member of the 1995 Springbok rugby team to pass away this young – Ruben Kruger and Joost van der Westhuizen passing before him and Jonah Lomu, who he was tasked with tackling in 1995, passed away in 2015.

A “Small” Name with Big Character

He was an outstanding rugby player, a hard running, hard tackling, wing. He was newsworthy for his action on the field as well as off. He was involved in many incidents which gave him his “bad boy” image one was an altercation in a Port Elizabeth night club. He was also dropped from the Springbok rugby team and was the first Springbok player to be sent off during a rugby test match due to a wordy altercation with the referee.

He scored 20 tries for the Springboks and played 47 games for them. The world admired his tenacity and courage when he had the task, in the final of the 1995 World Rugby Cup against the All Blacks of New Zealand, of stopping their giant All Black winger, Jonah Lomu.

He was born in Cape Town in 1969 but grew up in Johannesburg. When he once visited Robben Island and the cell in which Nelson Mandela was incarcerated in for 27 years, he thought of Mr Mandela’s horrendous ordeal, and how he still loved his nation, he was moved and wept. In his private life, he was a model and owner of several restaurants – Café Caprice in Camps Bay in Cape Town was one of them. He admitted abusing alcohol and cocaine and was involved with many supermodels. He had a daughter with one of them, Christina Storm, who he publicly admitted to assaulting. He said in an interview in 2003 that he was a reformed character, and the birth of his daughter changed his life.

He admitted that “life is not easy” and tried to commit suicide “after I lost the love of my life”. He went to stay with his mother to recuperate and was uplifted by a personal call from Mr Mandela who spoke words of wisdom regarding troubling times that most people go through and how they demonstrate strength to have the courage to start again.

It is with sadness that we say goodbye to one of our great characters whose antics on and off the rugby field earned him a place in South Africa’s hall of fame and the hearts of the nation.