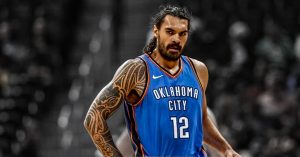 The NBA star Steven Adams has finally made comments on his recurrent delayed appearance. The great NBA player is yet to make his debut at the international level.

Having played for Oklahoma City Thunder since 2013, he is by far the most eminent basketball player in New Zealand. Unfortunately, the 25 years old star is still playing in the black singlet, for some reason known to him.

Looking at his book ‘My Life, My Fight’, it reveals the bad experiences that the player went through in the New Zealand basketball system that dishearten him. Adams said that it may not help, that he doesn’t feel an abundant sense of loyalty to New Zealand basketball. He said he had to fight through the ranks on his own, till he made it, and thus owes no gratitude to anyone.

According to Adams, most kids in New Zealand can’t afford to make it to the national team. It’s painfully expensive, and therefore many are locked out.

The System is Rotten

He believes he was obviously worth his salt, yet he couldn’t afford to join a national junior team. He was aware of players who always had their way on every trip, just because their parents were wealthy, and could pay for the tournaments. But, other players, mostly brown, couldn’t even step a foot near any competition, regardless of how good they were, just because the trials were unaffordable to them. Due to these reasons, Adams is not planning to represent the Tall Blacks any time soon. He insisted, not today, but maybe sometime in the future, when the system is better.

The good news is, the star loves what the current coach is doing, and the strategy and he would like to play under him someday; however, he insisted that he needs to be ready.