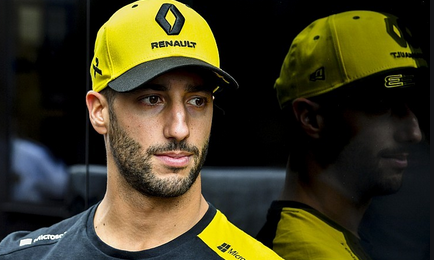 Pre-Season Testing for Formula One has completed, with some memorable moments occurring. One of those moments revolved around Daniel Riccardo and his specially designed helmet for the testing period. This helmet honoured the recently passed Kobe Bryant, who lost his life in a helicopter accident back in January.

Daniel Riccardo displayed this helmet after being a lifelong fan of Kobe Bryant. The driver also purchased a property somewhat near the basketballers home this year. It’s these two factors that prompted him to create this special helmet for the RS20, which was tested at the Circuit de Barcelona-Catalunya. When motorsport reporters questioned Riccardo for his decision, the former Red Bull Driver expressed heartfelt words regarding Kobe and Gianna Bryant. It should be noted that several other individuals passed away on this January 26th helicopter accident, which included the best friend of Gianna and her respective father.

Daniel Riccardo felt these questions were somewhat hostile, where the driver responded that because he’s never played professional basketball doesn’t mean he can’t relate to this man or admire him from afar. The Renault Driver noted that Bryant changed the game and that he wished he could’ve seen Kobe play live. Riccardo mentioned how he would’ve loved to meet Kobe Bryant and get to know him on a personal level.

These statements continued with Riccardo mentioned the admirable qualities of Kobe, that because of these factors, he was an immediate fan of what was represented with this basketballer. Daniel Riccardo idolises Kobe Bryant for accomplishing such a legacy with an unstoppable work ethic. Considering that the Renault #1 wants to become a legend in his own right, he can’t help but appreciate the qualities behind Bryant.

Multiple news outlets regarding Kobe Bryant questioned Daniel Riccardo. The Australian driver mentioned that numerous athletes from various sports had represented Bryant to honour his passing, which included Nick Krygios at the 2020 Australian Open. The Jersey that Nick wore displayed similar colour schemes to the Los Angeles Lakers, which provides for Purple and Yellow. Riccardo mentioned the significance of somebody from another sport representing a fallen legend.

It should be noted that Daniel’s actions saw multiple drivers be touched, with some becoming emotional at the sight of the Bryant Helmet. Other F1 drivers like Lewis Hamilton and Carlos Sainz have provided their condolences. Lewis Hamilton was particularly devasted, with the British driver personally knowing Bryant. Lewis mentioned that Bryant is one of the most significant athletes of the last 100 years.