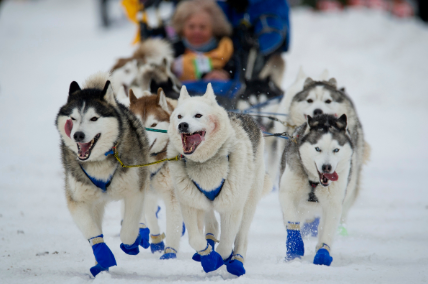 The Iditarod Sled Dog Race is held every year in March and covers 1049 miles from Anchorage to Nome in Alaska. The race is to commemorate the epic journey made in 1925 when brave mushers (dog handlers) carried a vital supply of diphtheria serum to Nome. The population of Nome especially were facing a deadly respiratory infection, and the only doctor, Doc Curtis Welsh, feared that the kids would need cecum if no serum were available. He placed Nome in quarantine. Nome harbour was icebound and the open cockpit planes of the day could not brave the weather, so the only solution was the dog trail.

The governor of Alaska, Scott Bone, called out the best dog teams and tasked them to run the trail in relays from Nevada to Nome. On January 17th, the serum arrived, and the teams set off with the serum securely wrapped in furs to keep it warm. Wild Bill Shannon took the first leg with nine malamutes and raced through hostile environments, frozen rivers, and miles of desolate tundra. Temperatures were 60⁰F below.

Overheating the dogs was not an option – frost in the lungs and hyperthermia was the consequence. Shannon had 50 miles to cover and was travelling at 6 miles per hour. The ex-Norwegian, Leonhard Seppala, took over having already covered 170 miles to get to his position. His 12 year old husky, Togo, led the twenty dog team. Seppala gambled and took the shortest route across the Northern Sound which was frozen over, and the winds dropped the temperature to 85 below. The team made it with the ice breaking up behind them.

The next musher was Charlie Olson, with a leg of 25 miles, and Gunnar Kaasem took over from him for the penultimate leg. Kaasen could not even see his lead dogs, led by Balto, and in a gust of wind, flipped the sledge. He eventually found the undamaged serum and continued to Port Safety on February 2nd, but as the next team was not ready, he stayed and completed 53 miles and at 5.30 am they delivered the serum to Dr Welsh.

The journey had taken five days, beating the previous record by half. In total, there were 20 drivers and 150 dogs, but the hero of the day was 12-year-old Balto, who starred in the movie “Balto’s Race to Nome”. He also completed a roadshow over nine months and was in New York for the unveiling of his statue in his honour.

The race is now held every year in March to keep the skill of mushing alive. The accolades for reinstituting the race go to Joe Redington and Dorothy Page who advocated for the competition in the late 1960s. Every year the world’s focus is on the Iditarod Sled Dog Race, and in this time, Nome comes alive with celebrations, speeches, including indoor and outdoor games.