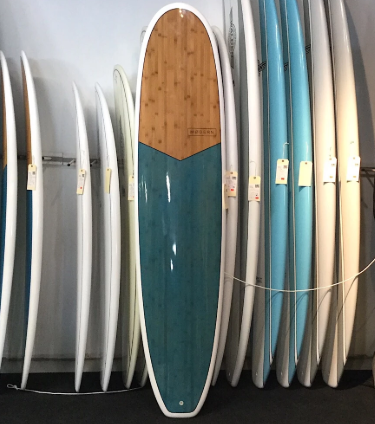 In the 1940s, when surfboard makers started using fibreglass and resin to make boards, a whole new world was opened. Until then surfboards were of wooden construction, similar to boats, with wooden bulkheads and sheathed in good marine ply, with a bunghole at the tail to let out any water that might have seeped into the body, or balsa wood (a very light wood) blanks! These boards were heavy and cumbersome and didn’t lend itself to quick, agile manoeuvres.

When board builders started using fibreglass to construct their boards, they found that they could accomplish far more and surfing was taken to new heights. These boards, when accidentally bumped or scraped on the rocks (or dinged), could be patched with resin that dried reasonably quickly, and at hardly any cost. Pigments were added to the resin, so boards became works of art and those with excellent designs and good patterns became the order of the day.

Board makers became skilled at shaping the polystyrene which formed the inner core and could tailor-make boards to suit the surfer’s requirements. The fins, or skegs as they were called, also took on various shapes and this opened surfing manoeuvres even further. Some paddles were interchangeable, and some boards sported three fins – all claimed to give the ultimate ride.

At first balsa wood was used as the core of the surfboard; this was because it is a lighter wood. It was hand-shaped into the desired surfboard shape and then covered in thin fibreglass to aid in waterproofing. Either general-purpose resin (GPR) was used as it is easier to work with and proportions were not as critical as an epoxy resin which requires exact amounts of hardener to resin. With GPR, the setting time can be adjusted for longer or quicker setting times. Expanded polystyrene later replaced the Balsa wood due to its lightweight qualities and the ease of shaping. EPS is still used today. Epoxy resin has to be used with this material as GPR will dissolve the foam.

In the beginning, boards were still long, about three meters called longboards. George Greenough and Bob McTavish designed and built shorter boards, considering the surfer’s height and body weight. Nat Young used one of their boards in the 1966 World Contest and revolutionised surfing by surfing the curl of the wave, as opposed to the direct, straight-ahead style used universally. The lightness of the boards enabled smaller and younger surfers to ride the waves.

Tailor making boards to suit the rider considers his style and wants, and this could be anything from a longboard of 3.5 meters or a shorter finned board of 1,8 meters. Other products have been tried and tested and found wanting. Today’s style of board is more concise and thicker than before. In 2006 Clark Foams closed their doors due to anti-pollution requirements from the government and eco-friendly greenies, so new products for board making were looking for.