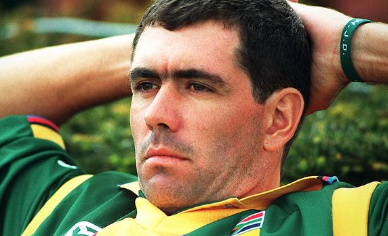 Hansie was one of South Africa’s, and the worlds, best-known cricketers. He captained the Proteas in 33 matches of which South Africa won 23 and lost 11. In the One Day Internationals, his team won 99 games, and it was in an ODI in ‘91/’92 that Hansie showed his potential against Australia at Sydney. He averaged 34 with the bat, and he bowled 20 overs on tour.

The first international game after having the ban lifted on South African cricketers, was against West Indies. The West Indies beat the Proteas by bowling them all out for 148. When India toured South Africa in ‘92/’93 Hansie tied up the match when they had only four balls left, by hitting a six. He also took five wickets in an ODI, the second South African to ever do this. In the next test, he made 135 off 411 balls – his first test century.

Despite being the youngest in the Protea team, Hansie was selected as the stand-in captain. In a three-way ODI against Australia and New Zealand, he helped SA to beat Australia with a brisk 91, and he was made Man of the Match. In the first test in Melbourne, he scored 71 with play being stopped by rain and in the second test SA won by a narrow margin of 5 runs. When captain Keppler Wessels was injured in the last day of play, Hansie took over the captaincy. In 1994 when Australia toured South Africa Cronje added a century to South Africa’s win of 197 runs.

Hansie became a captain in 94/95 in the series against New Zealand. Under Hansie’s guidance with Bob Woolmer as a coach, South Africa lost the first test in Jo’burg. SA went on to win in Durban and Cape Town when Hansie hit his fourth test century, and in 1995 against Pakistan and New Zealand, Hansie scored the only century, and after declaring, the SA bowlers just managed to beat the Kiwis. Hansie went on to captain South Africa through many wins and losses, and in total, with Cronje as captain; SA won 27 tests and lost 11. In ODI’s the Proteas won 99 times out of 138 matches. His 99 wins as captain of the Proteas placed him fourth in the list of international captain’s agenda.

In 2000, the awful news hit the press that Hansie might have been involved in match-fixing with Sanjay Chawla, of and Indian betting syndicate. Three other players were involved, but Hansie was banned for life from being involved in anything to do with cricketing. South Africa was shocked! Their idol, Hansie Cronje, could not have had anything to do with the crookery. It took a lot of time before it sunk in after the facts came out.