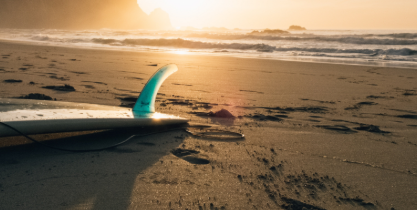 Last week we took a sneak peek at some of the histories behind surfboards, there is just so much information that it was not possible to shove it all into one little article. So, I thought after a week of wrapping your head around all the info piled on you last week; I could impress you with a little more.

The Invention of the Fin

In 1935 Tom Blake impressed the surfing community all over again when he added the first fin to a surfboard! I am sure many must have thought him nuts when in fact he was a genius. He experienced a much more comfortable, straighter paddle and a lot more control and stability on the wave when he first tested his finned surfboard. The physics behind the fin is that it stops the board shifting sideways when on away, before this invention, surfers hung their toes over the edge of the board. Upon conception and role out of the fin, surfers could now concentrate on their control and manoeuvrability of the board.

Let us talk about the leash

Pat O’Neill developed and introduced the leash in 1971, before this, surfers had to be amazing swimmers as when they fell off their boards they went rogue and had to be retrieved from shore. Pat used a surgical cord attached with a suction cup to the board; he introduced his invention in an international surfing competition. Unfortunately, this led to him being disqualified.