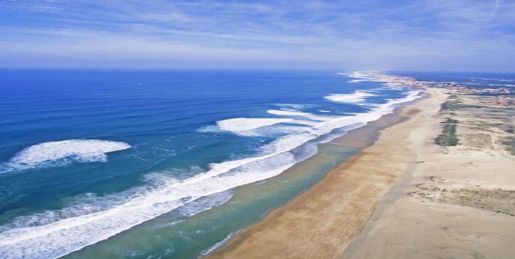 Surfing is by far, one of the best, individual, international sports. Many small towns around the world have become famous, first as much loved surfing spots, and then for being smart enough to host these events. Below we look at some small towns with prominent celebrity status.

A small town on the south coast of South Africa, Jeffreys Bay is named after one of its first inhabitants. During the ’60s and 70’s “J-bay” developed the stereotypical image of a hippie town. Today it is proud to be one of the fastest expanding areas in South Africa.
It is a well-known surf spot for ocean lovers and hosts several competitions yearly. Some might remember Australian Surfer, Mick Fanning, being attacked by a shark here in the 2015 J-Bay Open finals.

A beautiful, scenic beachside resort rumoured to have some of the best surfing conditions on earth. Its economy is focused on surfing. The Hossegorien’s are proud of their town and yearly in September people flock there to participate, support or enjoy Quicksilver Pro France. Before the Second World War, Hossegor only attracted wealthy visitors. Once the war ended, guest of various occupations visited including doctors, architects, and industrialists.

Haleiwa is the largest settlement on the north-facing beach area of O’ahu. Its humongous waves attract surfers from all over the world. Between 1965 and 1985 it hosted a surfing invitational, after which the Billabong Pro took up residency. North Shore is also the setting of many movies; you may remember “Blue Crush” and “Forgetting Sarah Marshall” and even etched into our minds in the animation “Surf’s Up”. The “Lost” series was almost wholly filmed on O’ahu. When it comes to competitions, it hosts the Triple Crown of Surfing every December. This competition is, in essence, a three in one as it is comprised of; the Reef Hawaiian Pro, the Billabong Pipeline Masters and O’Neill’s World Cup of Surfing.

Back to sunny South Africa, Hout Bay on the Atlantic seaside of the Cape Peninsula is also a surfer’s paradise. It sports a big wave known as Dungeons and annually hosted the Big Wave Africa sponsored by Red Bull. Sadly, this event was suspended after many deaths were recorded here, as well as unsafe 14.3-meter swells. Hout Bay is a historic fishing village that, still today, brings in food from the ocean and the market is a must-see attraction.