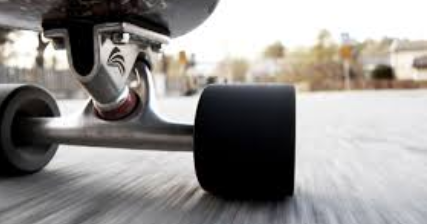 The strange and rather spontaneous invention first made an appearance in California in the 50ies. No one knows who made the prototype as it seems several people had the same idea simultaneously. What is known though, is that the thought came about when surfers wondered if they could bring their sport to the streets. The first skateboards were made from wooden boxes with the wheels of roller skates stuck underneath. This was a painful birth of a game that has broken many a bone over the centuries. As time went by the boxes, lost their sides and the boarders would skate on just the bottom plank. This was a fun way to kill time after a day spent surfing. Companies seeing a gap in the market produced boards of pressed wood. This evolved to the skateboards of today.

Skateboarding skyrocketed in popularity when large companies began sponsoring competitions. There wasn’t much to behold as the style was mainly downhill or freestyle. It was nothing like it is today; it was a smooth and almost graceful. Two years later skateboarding died out like a bad fad. Companies went into liquidation. If you wanted to skate, you had to make your own again. Those loyal to the sport pushed on even though finding parts was nearly impossible. In 1972 urethane wheels were invented, sparking new interest among surfers and the younger generation alike.

Come 1975, skateboarding rockets towards what we know it to be today. At a freestyle the Zephyr team took skating to a new level, showing the world a style they had never seen. The Zephyrs became known for their flat and smooth manner. Three years after the world met the Zephyrs, Alan Gelfand invented the “Ollie” a manoeuvre that gave both the skater and the board air. A Skater puts pressure on the tail the board while sliding the side of his front foot towards the nose. Near the end of the seventies, skate parks that had opened had to close their doors. Skateboarding, known as a dangerous sport, caused insurance rates to skyrocket, forcing many to turn their backs on the activity.

But the passion for the sport in the 80ies kept it alive. Skateboarders built ramps in their backyards and performed tricks on sidewalks and in parking lots, sometimes jumping walls to skate in empty swimming pools. Skateboarding had become an underground movement, giving it the law-bending stereotype it still has today. By the early 90ies skateboarding was almost wholly a street sport. During one of its popularity upswings the sports attitude rose with it, and with that, the angry misunderstood punk music which, together with skating, shaped a generation of the coolest people ever.